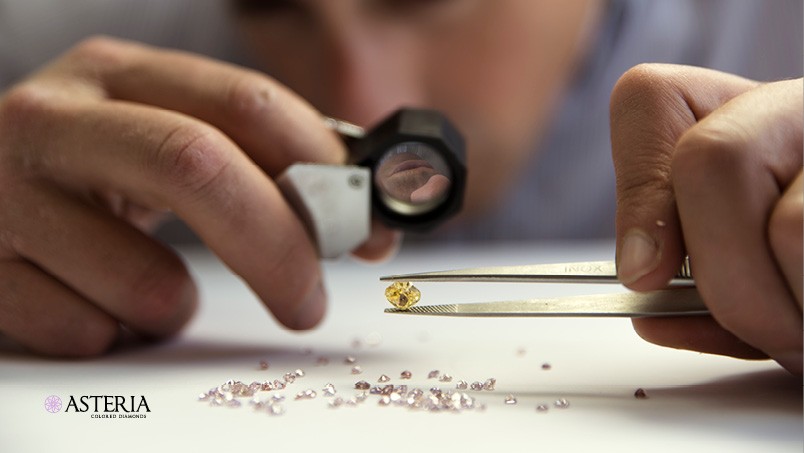 - the only diamond to ever sell for more than $4 million per carat. - In spring 2016, a Geneva-based fund manager famously purchases a highly rare colored diamond, a vivid orange, at the price of $1 million per carat.

- In May 2016, a 14.62-carat blue diamond sells for $57.5 million at another Geneva auction, becoming the most expensive diamond in the world ever to be purchased in auction.

In just the last two years, these are some of the high profile, high price colored diamond purchases that have made the news, and behind these headlines are an indication of the trends that signal good news for those considering investing in colored diamonds.

Prices paid at auctions are considerably over initial valuations, and colored diamond prices risen 122% in the last ten years, on average.

A transforming market of elite investors

It’s clear the marketplace has transformed. One of the drivers is a surge in loose colored diamonds being purchased as investments, to serve as discreet, valuable, and lucrative assets. Ultra rich investors are counting on the forecasted growth of colored diamond values and the relatively stability of these “recession proof investments” to bank on considerable profits with low risk.

Investors include professionals and funds investing on behalf of ultra rich clients who buy colored diamonds as alternative investments. This new demographic of investors has significantly expanded the diamond market, traditionally dominated by rare gem collectors and connoisseurs China in particular is seeing a growth in the ranks of newly made and young millionaires, who are on average under 40 years old. These youthful, nouveau riche investors don’t only want to secure their wealth, they want to do so in style.

They’re investing increasingly in what are coming to be called “passion funds”, long-term investments in tangible and usually rare assets. These investments appreciate over time and are generally safeguarded against unpredictable inflation or market fluctuations.

Passion fund goods include fine wines, works of art, collectible musical instruments, as well as rare colored diamonds. In addition to guaranteeing high returns, part of the enticement of these niche investments is that they are luxurious and reflect the social status of their owners.

A significant advantage of diamonds over other passion fund investments is that they are an asset that investors can actually use and enjoy at no cost or depreciation to the asset itself.

Due to the nature of collectables, assets are largely valued for their rarity and limited supply. As one of the world’s rarest commodities, it’s no wonder that Fancy Colored diamonds are where an increasing number of wealthy investors are choosing to put their money.

In the uncommon instances that one comes across this rare colored diamond on the market, prices are extremely high, and the stones are typically purchased at auctions for amounts staggeringly above their pre-sale valuation.

The investment forecast of diamonds predicts that valuations are only set to rise as diamond production is set to to drop significantly within the next 20 years.

As diamonds are a non-renewable resource, a precious mineral formed through millions of years of creation, the availability of diamonds on the market is dependent on existing deposits, which are being depleted at a much faster rate than there are being renewed.

Unless new mines are discovered in the near future, colored diamonds will be even more rare than they are now - and considerably more valuable.

Air of allure and a secret society

The unique and uncommon nature of colored diamonds is underscored and enhanced by the secrecy surrounding a rare colored diamond when it appears on the market.

Only 15% of colored diamonds for sale are purchased at auctions. In many mines, the best colored diamonds, typically around only 50 annually, are sold through sealed bids in an annual tender.

Investors must be invited to the viewings, which are held at secret locations in London, New York, and Hong Kong. These secret viewings of the world’s most expensive colored diamonds create a covert ultra niche market accessible only by the initiated - which significantly enhances the stone’s allure and perceived value.

Adding even more to the air of mystery surrounding these purchases, investors are allowed to examine the stone for sale one by one, in a hidden, windowless room, reinforcing the atmosphere of being members of a secret society.

To be a part of this growing buyer’s club for the world’s most valuable diamonds, one must be a part of the initiated elite - a much sought after status in the growing ranks of the super rich.

The discretion and anonymity that surrounds the viewings, and which are so valued by the often immensely private ultra rich investors, continues throughout the purchase process.

Diamonds are an extremely discreet investment: transactions don’t need to be registered with government agencies or financial institutions. Ownership can even be anonymous if the investor so prefers.

Additionally, Fancy color diamonds are easy to transport privately. Diamonds have a high size to value ratio: as they are so small, they are highly portable, which makes it easy to transfer wealth.

However, investing in diamonds is a complex decision. Learn more about each colored diamond in our diamond education articles, or consider speaking to our investment experts for pre and post valuation services.

If you’ve made up your mind to join the club of elite investors seeking recession proof investments, get one step closer to your invaluable investment with Asteria invest.